As a child growing up close to New York, I have always been obsessed with city life. The people, the different cultures, the public art, and the bustle of moving parts always excited me as someone who came from the quiet town of Greenwich, CT. I always felt that there was more to life and New York City was the place where dreams happened, so naturally, I would take the train every weekend to experience this dream...

When someone first sees a depiction of street art, one can think of all sorts of kinds of things. First, street art can be relative, as it can be seen or not seen as art depending on its appeal to the community. In New York City, this appeal can be seen in the light of public art and tagging. Each individual is different in nature, but tagging is almost Avante garde in nature.

In doing this project, we are looking at the prominence of street art on a global and domestic scale. Prominent artists such as Dai East, and Katsu, as well as work done by myself. Through understanding the similarities in formats, we can see how global artists have used street art as a way to transform neighborhoods.

We will also be looking at how some artists never fully transformed their work into art that would be accepted in the art world. Conceptual vandalists like Katsu, these artists tend to merge lanes with fashion and use their craft for marketing and clout.

This is Dai Easts mural in Wuhan, China. His depiction of the whale reminds me of a cross between Chinese animation Big Fish and Begonia and the possessed boar in Studio Ghibli’s Princess Mononoke. The most notable thing about this piece is the size of the wall they chose to display this artwork on. The size and height makes it almost impossible for this peice to not catch your eye.

To hear that pop-ups are happening all over China right now is actually stunning to me. I had recently read articles and watched videos describing how people in Beijing have been taking up street art and citing New York as the place of influence and style. Personally, when I went to the 798 art district and China and did my throw-up piece, I was not thinking about New York City. I was thinking about my personal struggles as a human being and my persistence in being the person I wanted to be.

Considering the recent COVID- 19 pandemic and the protests in Hong Kong, we must be aware of how a large mural like this would affect the community. Personally when I see a large well done mural I feel a sense of pride in the fact that another human being produced such a peice. Seeing a peice like this in China is something even more huge, as it can be difficult to get painting permits, especially working with the extremely beauracratic CCP. 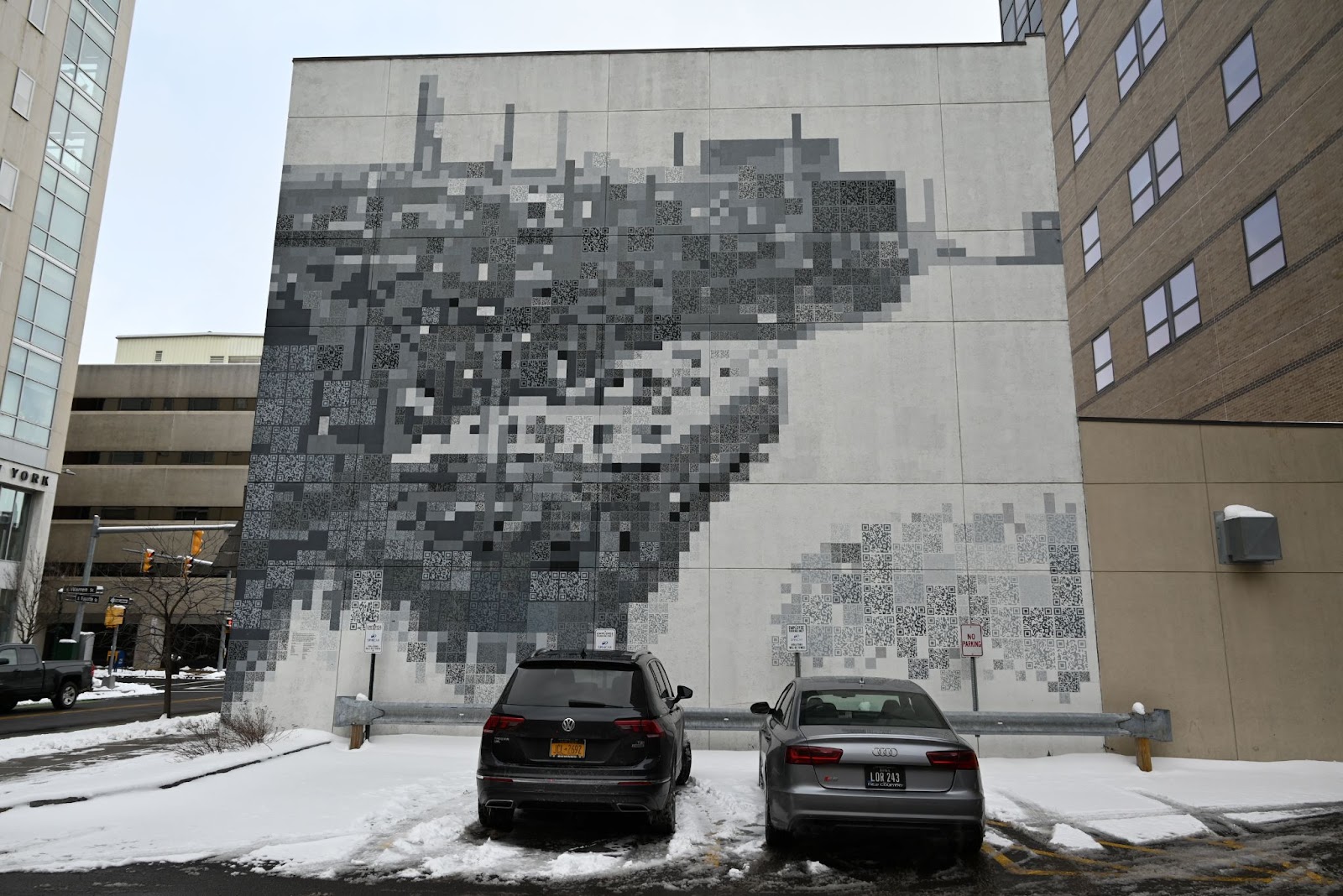 In looking at these two pictures back to back we are reminded of the ways in which street art can be used in order to transform a plain white wall into a communal masterpiece. In looking for a piece of art that was similar to Dai East’s example in Wuhan, China, I had to look for a large scale mural in downtown Syracuse. In choosing the mural, in particular, I had to sift through multiple photos that I have taken in advance to work on the website portion of this assignment.

While many of the pieces in Syracuse are works of art, I had to use my own rationale in order to pick a photo that would do Dai East’s work justice in terms of the size and space of the art piece.

For a while, street art was not accepted as a viable art form. However, through the help of artists like Basquiat, Keith Haring, and Banksy, the art world soon became obsessed with this new format and its application within communities.

This is a depiction of one of Katsu’s tags which can be seen by helicopter or plane. Many of his tags can be found located all over New York and he has even had his pieces featured in museums such as the Museum of Contemporary Art in Los Angeles. 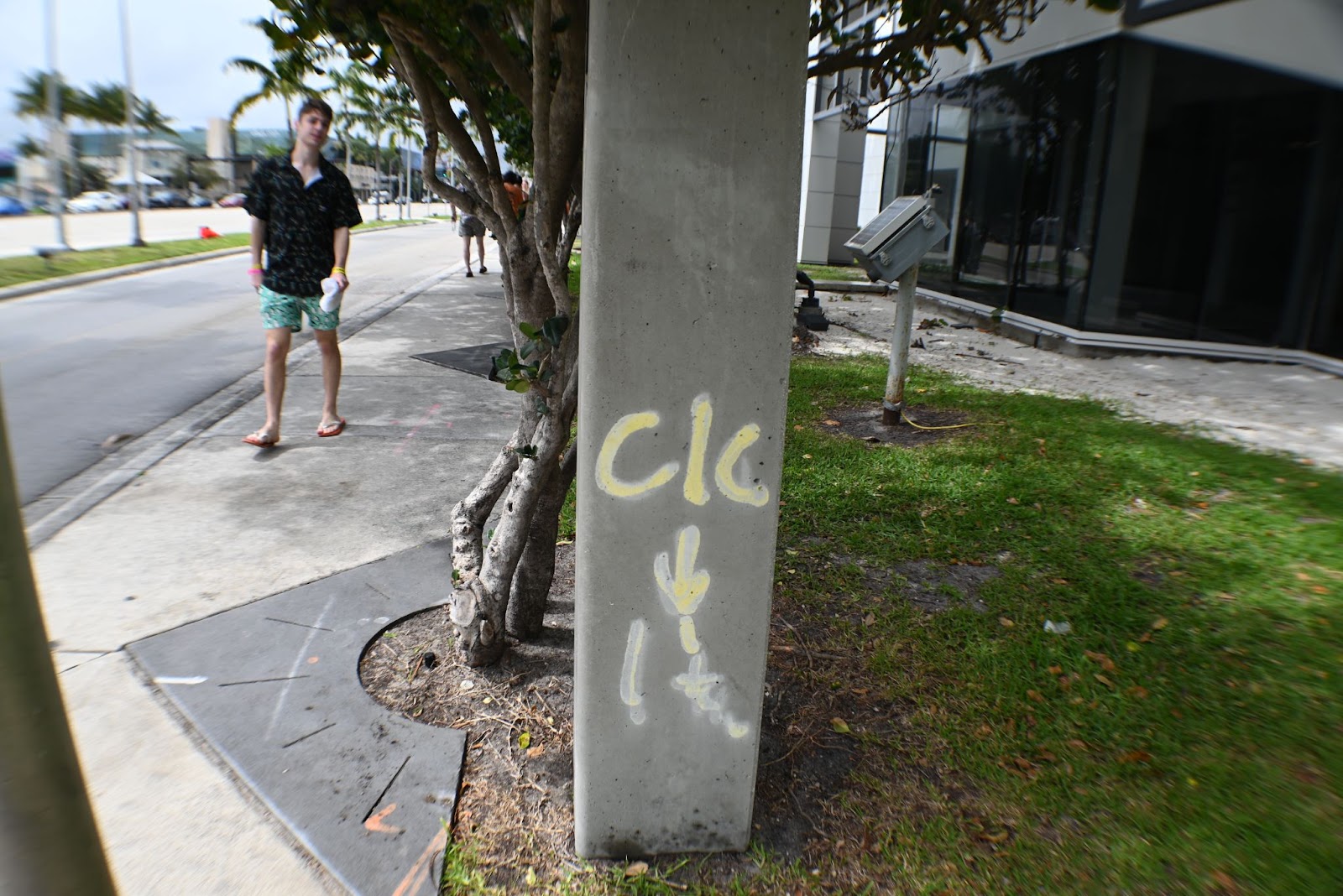 This is a depiction of raw street art or a tag. I am not sure what it means, however, the CK seemed to remind me of Calvin Klein who is a notable designer in fashion. While this tag could have been used as a way to claim territory, I found that this picture was a great example of the difference between art and simple vandalism.

A great ballad by Nardo Wick and Lakeyah that encompasses the vibe that Melvin Blogs would like to represent. The choice of this song is directly linked to the link to the idea of linking fashion with art. More importantly, finding a way for contemporary street artists to make money in other areas of business. As we continue to post we will also include explanations of certain street artists’ rise to fame. and fortune.

Through engaging with the material I have become aware of the many ways in which street art can be used as a form of expression. Personally, my relationship with street art is linked to nostalgia and my respect for art regardless of the platform it can be found in.

In looking at Street Art in the contemporary format, we need to make sure to emphasize that this form was initially connected to cultural heritage and painting was a means of expressing one’s identity in a harmless, yet rebellious, way. This will be covered in the next post which will also be located on the Melvin Blogs Contemporary Street Art page.

Through taking the time to take in my images, I hope that you see this work as a reflection of many different groups of people and cultures, all intersecting at a point where expression is felt to be needed or just necessary. In exploring these occurrences, I ask the audience to be mindful of the locations of the pieces and to think about what meaning could be drawn out of each depiction. 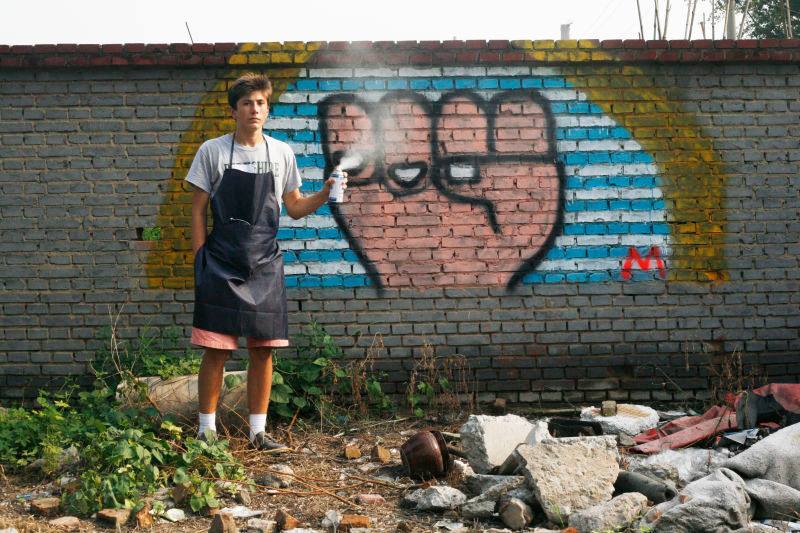 My introduction into the Contemporary world of street art came about during my time spent abroad in Beijing, China. During the duration of my time studying abroad, I enjoyed many local restaurants, talked with people in the area, and had a run-in with the art district. It came to my attention that many of the walls were very oblique and not very colorful. I thought that maybe a touch of art here and there would provide a more positive walk on the way home from work.

In making this remix freshman year of college I initially wanted to have an anthem that could be played at parties. With the reggaeton/dembow/percussive element along with the Bonnie Clyde Uknown lyrics, this piece definitely is hype.